In March 1918 of World War I (1914-1918), the Germans had successfully pushed the frontline to within 120km of Paris; the town of Chateau Thierry marking the tip of German advance. Nevertheless, in a daring counter-offensive on June 3, the American Expeditionary Force (AEF) reinforced the French and threw the Germans back across the Marne River.

Exhilarated by this success, the 2d Marine Division was tasked with taking the strategically significant Belleau Wood. On the Marines arrival the French were retreating in the face of the German onslaught, but the Marines defiantly declared « Retreat, hell! We just got here! » To take the wood the Marines marched through an exposed wheat field under fierce German fire, and suffered a staggering casualty rate.

The Marines, undaunted, reached the wood and bitterly struggled for 20 days, capturing and re-capturing it six times over, and finally securing the position against all odds, ending the last German offensive on the Western Front. The US forces suffered 9,777 casualties, took 1,800 German prisoners, and the wood was officially renamed Bois de la Brigade de Marine in honor of their courage and victory.

Discussing the strategy employed by the Allies and accompanied by original photographs and detailed maps, this book examines the two key battles that saw America’s baptism of fire in World War I: Chateau Thierry and Belleau Wood.

David Bonk is a lifelong student of military history and an historical miniatures wargamer. He has written for various wargaming publications, as well as the Osprey Military Journal. He is a member of the Historical Miniatures Gaming Society and served 6 years on the Board of Directors for that organization. He is very interested in the history of the American involvement in World War I and has been wargaming this period for some time. He lives in North Carolina. The author lives in North Carolina, USA. 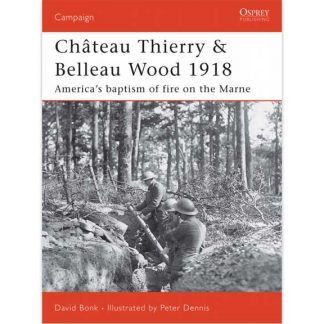